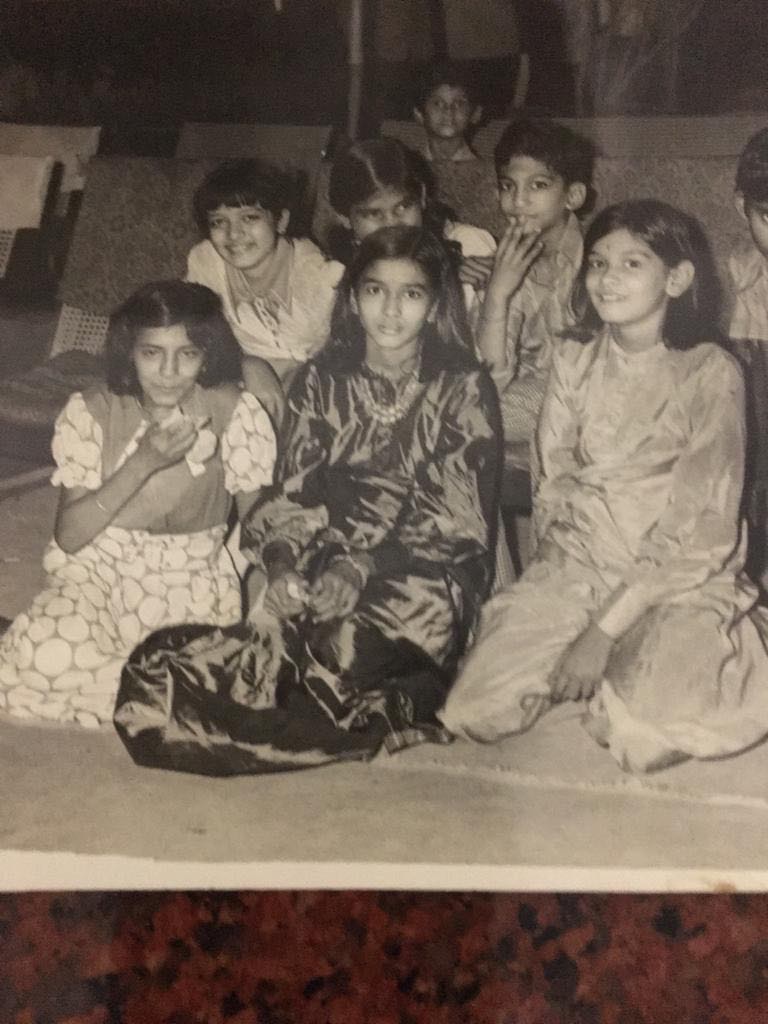 Gauri cunningly circulated this photo on our family group chat on Father’s Day. I was so proud of our eldest daughter, the girl kneeling on the right. Except for her first cousin next to her, I did not recognise the other children. I was puzzled, so I looked closely at the faces. Now, our second daughter smiled back at me, instead of the eldest! But the age difference did not make sense. Seeds of doubt sown, questions began to pop like kernels in my addled brain: “Which of the two daughters is it? Why is only one of them in the photo? Who are the other kids? Why is the photo in black-and-white? Hang on, isn’t the girl in the centre not cousin Aparna, but her mother Radha, Gauri’s older sister? And if that is so, could that mystery girl on the right actually be Gauri? As a 10-year old!”

The power of genetic make up had me engulfed. I was truly lost in a maze of disorientation. It took several conversations and some time to convince myself that I had, as usual, been wrong on my first assessment. Gauri confirmed that it was indeed her as a ten year old, kneeling beside her sister.

As is her wont, Gauri could recollect vivid details about the occasion, a family wedding held four decades ago. Zestful, she started off to tell me precisely what all she was up to that evening. I kept my interview rather clinical because I had a suspicion that her creative juices were starting to flow and had to be ebbed. Gauri has a fascination, actually more an obsession, for nostalgically reliving such celebrations. She has not attended many in the last three decades, since we have lived abroad after marriage, far from her parental home. Also, she is rather particular that she will not attend abridged festivities. It has to be the whole nine yards – a week of rituals and ceremonies with days mingling into nights – of singing and dancing traditional vernacular compositions, creatively curated for each occasion. A traditional Indian wedding is a complex and arduous event. Merely thinking about one makes my head swim. Gauri, on the other hand, has an impassioned penchant for them. She could pen an anthology on the subject. Given a chance, she can recount every dress worn, meal eaten, ceremony performed, conversation had and song sung frame by frame.

But I digress. This specific gathering was for an uncle’s wedding reception in Gwalior, a small town in Central India. Gauri’s family, her parents, grandmother and sister had started from their home in Calcutta, travelled west across the country by an overnight train to Delhi to rendezvous with some other branches of the family tree . A larger, more festive group had then made another overnight locomotive journey south for this reception.

Gauri’s eyes lit up as she reminisced on the clothes she wore. Her sister’s green and her own orange dress – the sharara – had been the latest fashion styles, and were debuted for the wedding. Haute couture was a rare indulgence for the sisters. It was their grandmother’s preserve, and over the preceding month, she had specially instructed the family darzee to come home and create the designs. I could picture Basheer Mia, hunched over his sewing machine in their backyard, under Dadi’s eagle eyes, with the tailor’s apprentice running errands and probably playing truant. The cloth was sourced from Dadi’s old silk saris and the ornamental buttons and old zari thread had special significance too. The twinkle in little Gauri’s eyes was just reward for the labour of love and craftsmanship.

I dutifully complimented her on the fancy clothes and observed an uncharacteristic absence of ornaments on her neck. I was wistfully informed that the ornate necklace embellishing her sister had been a shared commodity. Gauri had been either outranked or bullied out of it for this customary photograph. She has since set off on a mission to trace and locate a bigger family photograph. She remains optimistic it may have been taken on a different day. I have not expressed my reservation at this implausible conjecture, and wish her the best in her futile endeavour. I was also sensitively silent (‘habitually unobservant’) and oblivious to the bracelet I spotted on Radha’s wrist. Let sleeping dogs lie!

The less said the better of the other children posing for the photograph. They are distant cousins, a dangerous territory for me to venture into, given that knowing their names would certainly not trigger in me any emotions. I will simply be accused of senility, even worse, of dereliction, since I would not be able to even recall how they are related to her. It did take a lot of effort for me to not quiz Gauri on the smart young gentleman behind her, who did a sterling job of extricating himself from the camera lens, though leaving behind half a watchful eye.